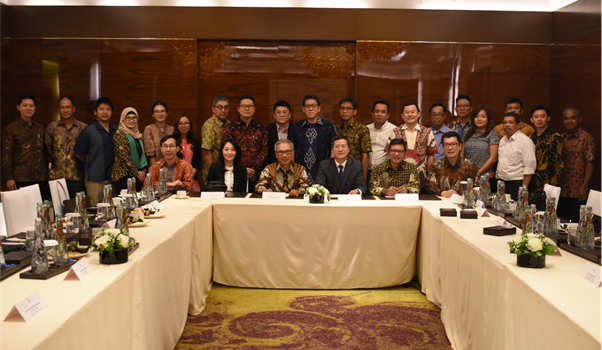 President of Republic Indonesia, H.E. Joko Widodo, is scheduled to make a State Visit and attend the World Economic Forum on ASEAN at the invitation of Vietnamese Leaders on September 2018. To prepare the Presidential Visit, Chairman of IVFA, Mr. Budiarsa Sastrawinata along with Director for Southeast Asia from Ministry of Foreign Affairs of Republic Indonesia, Mr. Denny Abdi and the Ambassador of Vietnam, H.E. Pham Vinh Quang held a business meeting on 27 August 2018 at Raffles Hotel. The participants of the meeting are IVFA members and Indonesian companies which have business operation in Vietnam.

Ambassador of Vietnam, H.E. Pham Vinh Quang stated that the relationship between Vietnam and Indonesia come from a long way. Since established as strategic partneship in June 2013, both Vietnam and Indonesia has sucessfully implemented action plan from year 2014 -2018 in various area from political and diplomatic dialogues, economic cooperation, security and defense cooperation, as well as promotion of tourism, cultural exchanges and people to people context. IVFA have many members of businessman, it took many years for economic development between 2 countries. Therefore the Government is open to suggestion and proposal from businessman for for next 5 years action plan.

In the meeting, Mr Denny Abdi emphasized that the role of government is as a medium or facilitator by making MOU, G2G, and improving the regulation while the main actors are businessman. At the political level the relationship among the government in Southeast Asia is very good. Every time they have an issue, the Ambassadors and government will discuss how to resolve it. The challenge is to convert the good relationship in political conditions into a mutually beneficial economic relationship between countries.